How to choose the right investment risk for your age group

Riding a bike with no hands, hanging from the top bar of the swings, climbing a wall ‘just for the fun of it’, trying out some fancy tricks on a skateboard… There are crazy things that most of us only attempt when we were young, and if you think about them years later, it’s easy to shake your head in disbelief.

The reason? Your perception of risk evolves with age. We tend to become more prudent, and this makes sense because your body does not recover in the same way at 5 years old as it does at 22 or 35, for example. Something similar happens with your finances and investments. Making mistakes at 20 is not the same as making mistakes at 50. That is why it is so important to learn to determine which risks you should take at each stage of your life.

The Golden rule: being able to sleep soundly

There are two parts to personal finance: the financial and the personal.

The first is theoretical, what the numbers and general recommendations say. The second has more to do with psychology, not general psychology, but with your own particular psyche, which is what makes them ‘personal’.

Applied to how you should invest according to your age and what level of risk to take at each stage of your life, there are a series of general recommendations, which we set out below, and others that are 100% personal, depending on your perception of risk, your situation and your personality.

To make it easier to understand, the general rule of thumb is that a young person…

The reasons are that you may be living at home with your parents (or not), and that as you are young you have time to recover from any downturns. Also, if you are investing for the long term, short falls and rises should not matter –see how to deal with your money during a crisis here.

As a general plan this is fine and even makes sense. However, it may not be the best solution for you if, for example, you do not handle losses well and sell at a 10% drop in your shares (you will be selling at the worst time). This is the personal part of personal finance, the part that depends on you and not on what the math says.

That’s why the golden rule for deciding how much risk you should take with your money is simple: you are still able to sleep soundly at night.

This applies to both the investment and the distribution of your assets. Some people need to have more money in liquidity, as an emergency cushion, and some people need less. For this reason, there is a general recommendation about how much to invest according to your situation, in addition to a personal assessment. Making the decision taking into account only one of these factors is a recipe for failure.

The 120 rule: an approach for making your decisions

The golden rule for establishing how risky your investments should be takes into account the personal aspect. What about the financial side of things? What do the numbers say about how to organize your investments according to your age?

The general rule is the one we’ve already told you about, and it can be broken down into two parts:

This risk is normally measured by the amount of fixed income (bonds) and variable income (stocks) that you have in your portfolio. Bonds are more stable and are assumed to be less risky, while the stock market is more volatile and has a higher risk of loss.

When investing, risk and profitability are intimately linked, or at least they should be. In other words, the more risk you take in an investment, the more profitability or potential profit you should demand. A good example is investing in cryptocurrencies, which can double in value and make you a lot of money, but can also cause you to lose it all. In other words, a big risk with a corresponding return.

What percentage of fixed and variable income should you include at any given moment in your life? A simple way to get an idea is by using the 120 rule.

What is the 120 rule of investing? This recommendation is also based on two concepts:

In other words, first you invest to accumulate wealth and then you consolidate this until the time comes to get the money back. This could be when you retire, which is the most typical scenario, or when the deadline you have set yourself is reached if you were saving and investing to buy a house, or pay for your children’s schooling, for example.

This theory is expressed by a specific distribution of the percentage of fixed income and variable income in your portfolio. According to the 120 rule, you simply subtract your age from 120 and you will obtain the percentage of variable income assets that you should include in your portfolio. In short, this is the recommended risk according to your age.

For example, if you are 25 years old, the result will be 5% fixed income in your portfolio and 95% variable income. This is how the portfolio risk and asset allocation should evolve according to your age. 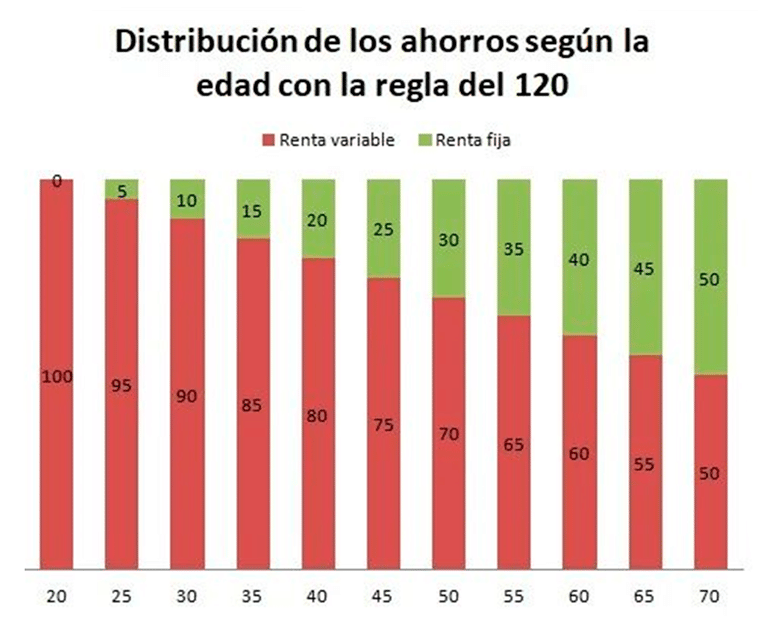 Remember that dividing your portfolio between fixed and variable income is only one form of diversification, but that you should look beyond that. In this article we explain the importance of diversifying your investments and how to do this.

The 120 rule can be used as an approximation to establish the risk profile of your investments, but it is not infallible. In fact, some people prefer to adjust it to 100. In this method, they take 100 as a starting point and subtract their age from it.

There are also those who believe that this vision is somewhat conservative and prefer to maintain a higher risk portfolio until they reach the age of 50. In other words, they reduce their percentage of fixed income in a less progressive way.